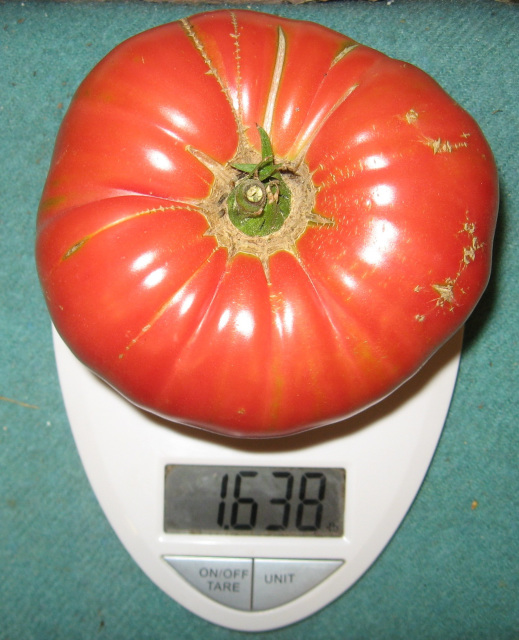 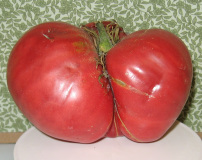 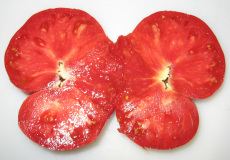 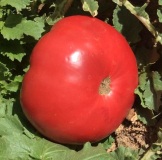 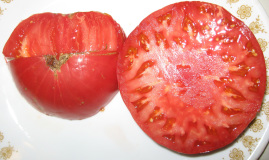 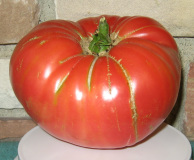 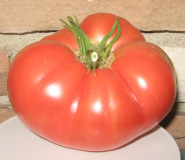 Here is the unedited story of this excellent variety, written by Doug Oster and published online here in 2013:

“Here's the story of Fred Limbaugh and the tomato he introduced to the world.

We meet lots of people over the years. Some come and go, but others always hold a place in our hearts. Fred Limbaugh was one of those special people.

I first met Fred on a warm day in the spring of 2000. After reading about my love of heirloom tomatoes, he was compelled to call and tell me about the tomato his family had grown for generations, ‘Potato Top.’ He invited me over to pick up a couple of plants to try.

“They’re the best-tasting tomato you’ll ever eat,” he bragged.

I listened with interest as he talked about the plant he loved and had given away to friends and family for years. Once they grew ‘Potato Top,’ they were hooked, said Fred, who didn’t even like to eat tomatoes but grew them for everyone else.

Over the years, Fred and I became good friends. We would visit at his home in Robinson, and on hot days he would offer me a cold beer but never drank one himself. We talked about gardening, his love of the outdoors, his beloved German shepherds and how he was getting along in his 80s.

Together, the two of us would walk down a steep embankment in his back yard to his cold frames filled with deep green tomato plants; they had thick stems and sometimes were covered in bright yellow blossoms. As he got older, he couldn’t get down there anymore. It was even hard for me to navigate, and I was 40 years younger.

Years ago, I started giving away the seeds of ‘Potato Top’ with the condition that gardeners send me some seeds at the end of the season so I would have more the next year to keep the program going. I wanted everyone to taste it and hoped that by sharing the seed, we could guarantee the survival of this tomato with potato-like foliage for a long time. Every year the project grew, expanding from Western Pennsylvania to other states and eventually to many other countries. One summer, I got 140,000 seeds back from readers all over the world.

Fred was never one for the limelight. As ‘Potato Top’ became more and more popular, he would call me and say with a laugh, “I never thought one phone call would turn into this.”

One time his daughters brought him to North Park, where I was giving away the plants. Wanting to recognize Fred for starting the whole project, I tried to make an announcement. But Fred wouldn’t hear of it, and in an instant he was gone, slipping away so he wouldn’t be noticed.

His health took a turn for the worse a few years ago. When I went to visit him at a nursing home, he was figuring out a way to grow tomatoes on a windowsill so he could still provide plants for everyone who asked.

That was the year I started growing plants for him, as many as I could in my little home greenhouse. They never looked as good as Fred’s; he just had a knack for getting nice stocky, healthy transplants. Eventually, I turned the job over to friends at Soergel’s, who were able to produce quality plants for him.

Several years ago, Fred passed away at 86. He was out for dinner the night before with his family and then was gone early the next morning.

I always felt we were kindred spirits whose love of gardening transcended the boundaries of age. I’ll never forget that first day we met when he gave me two large plants, their roots surrounded with newspaper.

In memory of Fred and with the blessing of his family, I’ve renamed the tomato ‘Limbaugh’s Legacy Potato Top.’ For decades to come, I hope gardeners will search the name of the tomato and rediscover its origins. They’ll learn about a wonderful man who wanted nothing but to share a big, meaty pink tomato with some friends. Little did he know that he would be sharing it with thousands of strangers, too. That always made him feel good, to know so many people were enjoying the tomato.

I miss that old guy and always will think of him as I sit at home filling seed envelopes to be sent to gardeners here and abroad. And it feels good knowing that his name will always be linked to a family heirloom that will live on in gardens around the world.

Recently this Pittsburgh heirloom was mentioned in Redbook Magazine. I’m sure that would make Fred smile."